BIRD OF THE MONTH 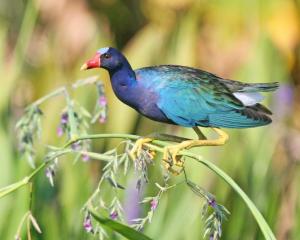 This year has seen an unprecedented number of visitors to the two boardwalks at the Celery Fields.  One of the stars of the show, and a symbol of the success of the wetlands area, is undoubtedly the Purple Gallinule (Porphyrio martinica). Prior to the Celery Fields development, this bird was becoming increasingly more difficult to find within the Sarasota area, and rarely at the Celery Fields. Now it is one of the birds that visitors have a very good chance of seeing, and the numbers are now significant.

The Purple Gallinule, as its name suggests, is a charmingly colorful bird with entertaining habits, sometimes clambering clumsily up the reeds, hanging on precariously; or picking its way across floating vegetation such as lily pads, with its extraordinarily long yellow toes, which enable it to do so without sinking.

The Purple Gallinule certainly puts its drab cousin, the Common Gallinule, in the shade. This latter bird, until recently known as the Common Moorhen, is less of a climber and more of a swimmer. Interestingly, the Old World and New World moorhens have not always been lumped. The AOU (American Ornithologists’ Union) treated New World populations as ‘Florida Gallinule’ (Gallinula).